How is the City of Prague's Smart Cities strategy being implemented? The annual Smart Prague Index 2021 will answer 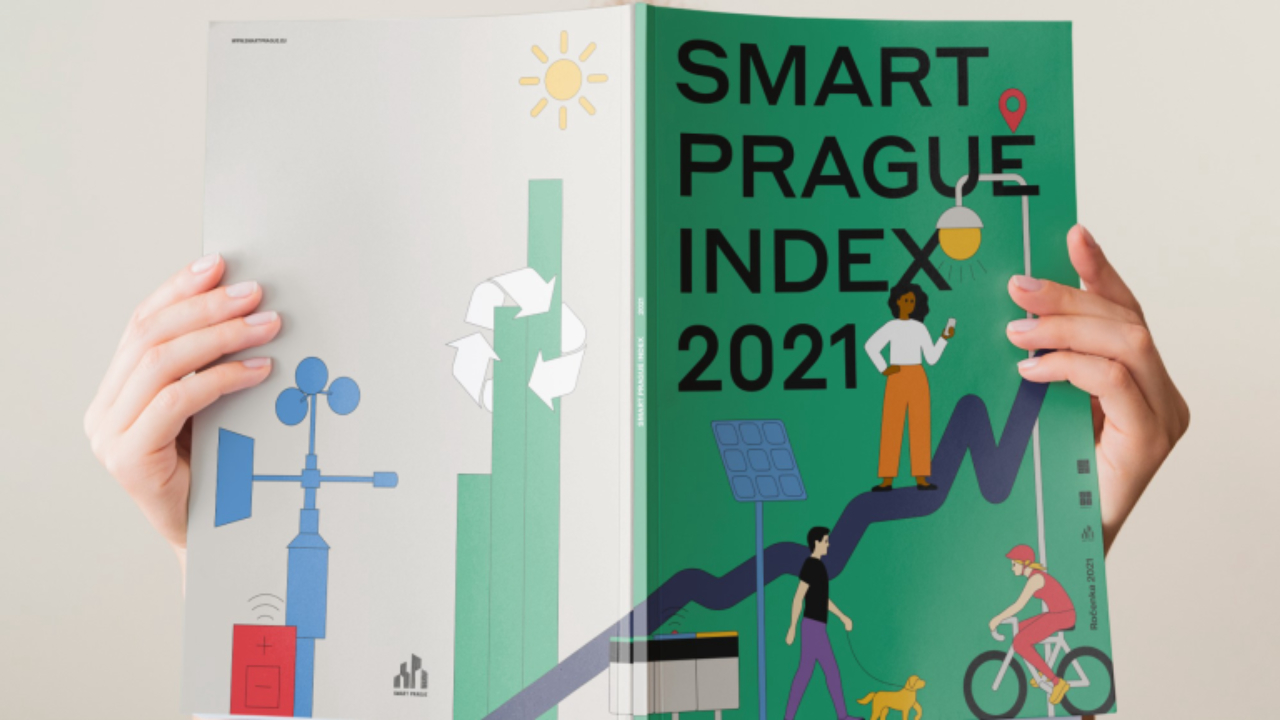 The yearbook maps the development of Smart City indicators in Prague and projects in the areas defined in the Smart Prague Concept to 2030. It is the fifth time in a row the yearbook has been published, this year enhanced with a clear infographic. The electronic version can be downloaded at https://smartprague.eu/smart-prague-index

Thanks to the illustrative infographic, it is easy to follow the development in individual areas and get a quick picture of the development of the Smart City concept in Prague over five years. Smart Prague projects help to respond appropriately to the challenges of climate change, the transition to new trends in mobility, the ever-increasing demands on the quality of housing and life in the metropolis, or address the cost-effectiveness of urban buildings and operations. Nearly thirty projects are currently in various stages of implementation and cooperation on international projects has been initiated.

Mobility of the future

The number of electric vehicles in the territory of Prague has gradually increased and by the end of 2021 there were 7,191 of them. However, the number of all vehicles registered in the territory of the capital city was also growing. In this context, this means that vehicles in Prague are getting older and older (their age has been increasing since 2019), although new vehicles with low emissions are increasing.

In terms of charging infrastructure, the number of fast charging points, which are built mainly for transit, is still predominant. However, when comparing slow and fast charging, we can see that slow charging has grown more significantly. However, the difference in the number of recharges for both types of stations is small compared to previous years.

Data from shared mobility providers showed an increase in the number of shared vehicles. However, the upward trend has slowed and may be a gradual saturation of demand. The data also showed that more than a third of shared vehicles were electric or hybrid vehicles, confirming that new and low emission vehicles are at the forefront of interest. Electric buses were one of the indicators monitored. Their total number increased significantly, but due to a decrease in demand from private customers, the number of kilometres they travelled decreased. The number of buses and their mileage outside of Prague has continued to increase.

Mobility as a Service (MaaS), in Prague its pillar is the PID Lítačka mobile application, which is being registered by more and more people. In contrast, the number of users of the "plastic" card itself is already at its peak. The use of the city app for transport around the city was also evident in other indicators, e.g. the number of searches for connections increased significantly, by almost a third, and the number of ticket purchases doubled, confirming the trend that people are moving away from traditional paper tickets and prefer the digital option.

Priority is given to the sorting of municipal waste and its re-usage. During 2021, there were a total of 6,105 sorted waste sites in the city. In terms of the metropolitan population, one collection point served 369 residents as of December 31, 2021. Each resident of the capital city sorted 48.5 kg of paper, glass, plastic and beverage cartons together. Of the total of 446 thousand tonnes of waste generated in Prague households, mixed waste is still the most represented, accounting for approximately 58.4%.

In 2021, a total of 228 thousand tonnes of waste deposited by citizens to mixed municipal waste bins, i.e. 87.5% of this waste, was treated in a waste-to-energy facility. The share of material utilization of all waste produced by the city reached a total of 29%.The quantity of waste increased from 125.5 thousand tonnes to 127.9 thousand tonnes. Bulky waste was collected at collection yards in 39 805 t, or 31 kg per resident.

Last year, it was also possible to deposit items such as furniture, books or sports equipment in the 3 permanent collection yards, i.e. items that could be reused for the Prague residents in need. As part of waste prevention, SWAP events were also organised, in one of them, about 1 tonne of items was collected in 7 hours and 80% of the total amount that was brought in was dismantled during the event, the remaining 20% was taken care of by the participating organisations.

The conversion of sewage sludge into raw materials and the amount of energy produced was also at the forefront. In 2021, there was a reduction in the amount of sanitized dewatered sludge, mainly due to the reduction of tourism, the closure or limited operation of hotels, restaurants, shops and service establishments, etc. A trend can be traced in which a number of businesses, where possible due to the nature of the employment, are moving to a combination of office and home working for good. This has already reduced the consumption of drinking water in Prague this year and is likely to continue to do so in the future.

The recorded value is indicative of the energetically outdated building stock owned by the Prague City Hall, but energy source replacements, building envelope renovations and also the updating of the building energy performance certificate (EPC) are gradually taking place. For this reason, the indicator has and will have an improving trend.

In 2021, the number of smart meters at Pražská plynárenská, a. s. has seen an increase in the Medium Demand category, but especially in the Small Demand category, where several projects have been implemented. The total number of meters at Pražská plynárenská, a. s. recorded a decrease, mainly related to customers in the category Household, most often customers who have cancelled their gas cookers and do not have any other gas appliances at home.

Another indicator being monitored is smart lighting. There have been 491 new smart lamps installed and dynamically controlled public lighting is being tested in a number of Prague parks.

In 2020, the number of visitors fell by 73% due to the COVID-19 pandemic and approximately 5.8 million fewer tourists visited Prague. In 2021, a slight increase in the number of visitors is already visible, by 8%. According to the Czech Statistical Office, overnight stays in Prague have long been around 2.3 nights. The number of overnight stays last year increased slightly year-on-year by around 7.2%, with the average length of stay remaining at 2.2 nights. Despite the unfavourable situation in 2020, the number of rooms in mass accommodation establishments increased by 3.6% and bed capacity increased by 7.5%. In 2021, the total number of rooms decreased by 3.7% and the total number of beds decreased by 8.4% and there was again a slight decrease in room occupancy due to the global travel restrictions as a result of the COVID-19 pandemic.

Tourism is expected to return to normal in the future and therefore needs to be further developed in a coordinated manner using innovative technologies, based on both reliable movement data and visitor preferences. That is why the Prague Visitor Pass (PVP), a new multi-purpose Prague tourist card, was created, with which the Prague Capital City will offer tourists comprehensive services on its territory. The PVP is also linked to public transport services using a multi-channel check-in system and is available both in physical form and, of course, as a mobile application.

People and the urban environment

One of the components of building a smart city is the implementation of so-called smart elements (e.g. sensors, systems or "enhanced" existing elements). These elements then help either people within the urban environment to better security, information or new data, which then inform further development and efficient city management. Over the past year, Prague has seen an increase in these elements, and has become a lot smarter as a result. More and more green spaces are managed by smart solutions. These are mostly irrigation systems that take care of the greenery according to actual needs. Their number has increased by almost 60% year-on-year. Significant changes include the inclusion of pedestrian and cyclist counters in normal operation. The data from these sensors helps the city to monitor the trends of different traffic modes at different locations in the city. The Active Mobility Database is also part of the Sustainable Mobility Plan of the capital city of Prague. In 2020, 169 traffic signs equipped with IoT technology were included in the pilot operation, which will provide new information (GPS position, position relative to the Earth's geomagnetic field, change of position from the baseline, etc.) for traffic signs already in use or installed. The technology will help detect changes in the state of the sign, which will be quickly addressed, helping to eliminate any negative impact on road safety in the city.

The solutions for each key area within the Smart Prague Concept are not isolated. It is an entire large-scale system interconnected with Prague's data platform Golemio, which allows citizens and companies to evaluate and interpret the data collected. The data platform manages and evaluates city data as a whole, providing city officials and residents with a structured overview of the city's operations using clear visualizations. This includes opening up the data for the Prague City Hall.

Through the Golemio BI web application, users are provided with access to data outputs, primarily dashboards, i.e. de facto simple applications providing a view of analysed data in numerical or graphical form, but also map applications displaying selected data and export modules for subsequent data analysis. In 2021, the number of published dashboards was close to 130.