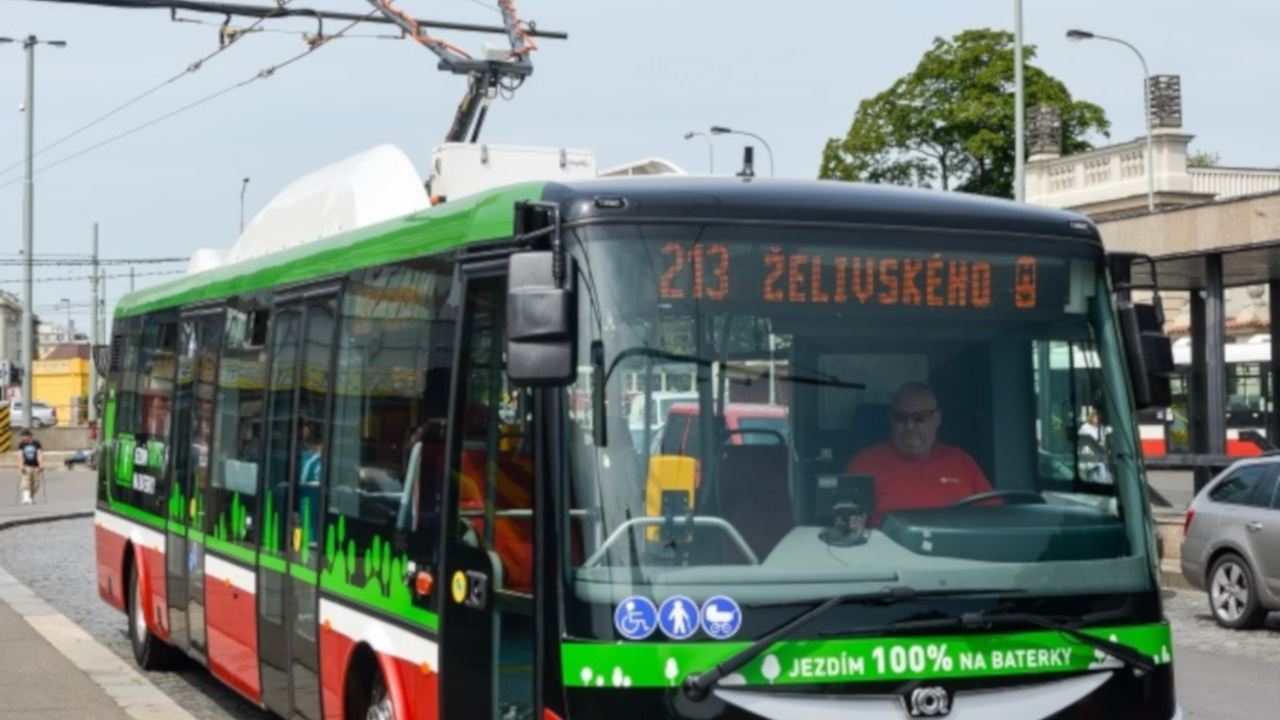 On line 109 (Palmovka – VÚ Běchovice) 1 electric bus is being operated with fully electric running heating and air-conditioning included. Charging of the electric bus is a combination of night charging in the garage via a cable and concurrent charging during operation breaks at the bus turning point Palmovka via a pantograph collector and bipolar trolley lines. Electric energy is taken from the tram’s power systém which allows for reaching the optimal price per kWh.

On line 154 Strašnická ↔ Koleje Jižní Město (the former line 207 Staroměstská – Ohrada direction) 14 electric buses with fully electric running will be operating with heating and air-conditioning included. Charging of the electric buses will be a combination of night charging in the garage and concurrent charging during operation breaks at the bus turning point Ohrada, in both cases via a pantograph collector and bipolar trolley lines. Electric energy will be taken from the tram’s power systém which allows for reaching the optimal price per kWh. Presently the finalization of the tender is going on and the signing of purchase for altogether 14 standard electric buses of 12 m length with the winning contract contender is presumed. In the Vršovice garages, preparatory works have begun on the charging infrastructure. In November 2020 effective permission for charging infrastructure at Želivského as well as Strašnická was obtained. The implementation of the charging infrastructure will take place in the year 2021, and the supply of electric buses till the end of the year 2021.

On line 140 (Palmovka – Miškovice, in the first stage in the Palmovka – Letňany section) – there is one vehicle already in operation with the dynamic charging with fully electric operation with heating and air-conditioning included. Charting of the electric bus goes by the combination of charging during a ride via trolley-bus type collectors and static charging in the garage via a cable at the bus turning point Palmovka (the ratio being 90 % battery to 10 % under the trolley). A trolley for the dynamic charging is installed in the Proceská street between the Kundratka and Kelerka stops to test the advantages of an electric bus and the possibilities of the concurrent charging of batteries with the most energetically demanding movement – a gradient drive. Electric energy is in the Palmovka junction taken from the supply network for trams (Dobudka) which allows for reaching an optimal price per 22kV. There is a mobile converter station connected to the network of 22kV installed in Prosecká street. Trolley lines will be charged from three converter stations and at the garage layby Klíčov 18 charging stations for battery trolley-buses or further development of electric busses should be built. The aim received an affirmative result by the EIA finding proceedings and effective planning permission. Presently a building permit process is on as well as property relations settlement. For securing fully zero-emission operation at the given line there is an assumption of purchasing up to 15 joint battery trolleybuses. The expected costs mount to ca. 300 mil. CZK for the battery trolleybuses and ca. 190 mils. CZK for the charging infrastructure. For this project in May 2020, PTTC issued a request for joint funding per the formal notice nr. 43 of the Prague – A Growth Pole operational programme whereas the amount of the contribution can rise up to 85 % of all eligible costs for the vehicles purchase. The expected term of implementation of the project is within the period of 2022. At the turn of this and the next years, it is presumed a tender will be issued for purchasing 15 joint battery trolleybuses for line 140 in accordance with the preparation of charging infrastructure realization.

On line 119 (Nádraží Veleslavín ↔ Letiště Václava Havla) an electrification project by the way of large scale capacity three-segments battery trolleybuses is in preparation. The project assumes utilizing already existing as well as prepared charging infrastructures of tram transport. Altogether charging for ca. 53 % of routes should be built and 20 vehicles purchased within a period of 2022. The project aims at solving acute capacity issues of line 119 with regards to the distant horizon of the train connection to the airport which preparation and implementation do not impact this aim. Assumed total costs are amounting to 900 mils. CZK (the infrastructure and vehicles). The stated aim of the line 119 electrification in the uttermost extent uses available synergies within the tram supply network and in view of the fact of spent investment costs covers the operation of the majority of the built infrastructure and battery three-segment trolleybuses even after putting the train connection to the airport into operation within a further bus transport electrification development. In September 2020 the aim gained an affirmative result by the EIA finding proceedings and presently gathering of the statements from all affected bodies for common permission.

Following the approved Conception for alternative fuels utilization in the PTTC bus transport conditions that were authorized by the PCH Resolution nr. 631 from 6. 4. 2020 in accordance with the Climate Commitment of TCCP which aim is to decrease CO2 emissions until the year 2030 by 45 % in comparison with the year 2010 was, by the PCH Resolution nr. 1130 from 8. 6. 2020 sanctioned the preparation of the second stage of the electrification development at given PTTC bus lines in the left-bank part of Prague (lines 131, 137, 176, a 191 with the base in the Řepy garages being included). The beginning of necessary infrastructure preparation is vital because of the continuous securing of the bus fleet per the sanctioned Conception to use alternative fuels as it would be possible to fulfil not only the PIT Quality Standards but as well the given legislature and strategic aims in the emission decrease and energy demands area.

The electrification on the given lines can be managed with the help of all inner synergies of PTTC with the tram charging systém of the trams crossing given lines at several spots. The lines create one functional complex where the base electrification axis represents the line 191 which interconnects the locations of Ruzyně, Břevnov, Strahov and Smíchov and at the same time creates prerequisites for access routes from the Řepy garages for other lines. Those are very demanding lines in terms of terrain at which routes exist many gradients and descents. Thanks to the electric drive principle and the recuperation possibility (utilizing break and potential energy) it is possible to achieve energetically more effective and due to dynamic qualities of battery trolleybuses even a smoother operation.

A big portion of mentioned lines goes through routes the original trolleybuses railways (Bořislavka, Strahov, Jinonice). All given lines are characterized by high transport demand not only during peaks, which manifests itself mainly in quite short intervals. The bus transport intensity is high on these lines. The routes of the given lines go through the highly-dense residential built-up area of the city districts Prague 5, 6, and 13, marginally even Prague 2. thanks to the high intensity of bus transport and significantly uneven terrain by deploying the battery trolleybuses not only a noticeable decrease of emission strain but also noise parameters of the operation improvement will follow because the battery trolleybuses operation is in particular during setting in motion and gradient ride distinctively more silent in comparison with diesel buses.

The whole investment costs for all aims oscillate between 1,0 – 1,3 bil. CZK (margin inclusive). In regards to the realization of the presumed aims within a period after the year 2030, the PTTC effort will be to secure potential joint funding from the EU available funds. To joint funding of the charging infrastructure for battery trolleybuses, the OPD III location could be utilized, alternatively so-called Modernization Fund. The key aspect will be the attempt to get a contribution for the battery trolleybuses’ purchase for respective aims where particular notices from the Integrated Regional Operational Programme (IROP) are to be expected as well as the Modernization Fund. Respective aims should be ready in the manner that after proper implementation sanctioning by the PCC it would be possible to implement them within a period of the years 2023–2025. For the project documentation preparation in autumn 2020, a processor was selected with the presume that the beginning of designing works is December 2020.

Pilot operation of the project